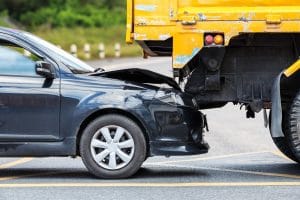 Many compact cars are so small that when they collide with 18-wheelers, semis, and other large trucks, they can slide under the trucks – killing anyone in the compact car. Cars might slide or be forced under a truck in a rear-end collision. Truck underride accidents can also happen in a head-on crash or when a car and the side of a truck collide.

At Philbrook Law Office, we file wrongful death claims on behalf of the families of the victims of truck accidents. Any victims who are lucky enough to survive an underride accident can file a personal injury claim against the truck driver and any responsible trucking companies.

How do truck underride accidents happen in Vancouver, WA?

Trucks that are equipped with guards can prevent truck underride accidents at the point of collision. As of 1996, the Federal Motor Carrier Safety Administration (FMCSA) established rear underride guard requirements for trailer and semitrailer trucks to help avoid rear-end collision underride accidents. The regulations do have some exceptions for “special purpose vehicles” because the guards may not be practical “due to the presence of work-performing equipment mounted on the rear” of the trailer or semitrailer.

There are two federal underride guard standards that work in unison:

New truck underride legislation was proposed in 2017 but did not obtain approval. However, new legislation passed in 2021 may change things.

Truck underride requirements based on the new 2021 infrastructure bill

The new truck underride legislation, according to the FMCSA:

The FMCSA and the National Highway Traffic Safety Administration (NHTSA) are also required to serve on an underride advisory committee, which will provide advice and recommendations to the Department of Transportation Secretary on safety measures designed to reduce the risk of death and injury due to truck underride accidents.

Who is liable for truck underride accidents?

We also anticipate the arguments that the insurance companies and defense lawyers for the defendants are likely to assert. These arguments might claim that:

At Philbrook Law Office, our Vancouver and Battle Ground, WA truck accident lawyers file claims against all responsible drivers, trucking companies, and truck manufacturers. We demand compensation for the victim’s and family’s economic losses and personal losses. Our lawyers have a strong track record of success settling truck accident claims and trying truck accident cases in court. We handle all types of truck accidents, including truck underride accidents.

To assert your right to compensation when drivers and others cause harm or wrongful death, talk to our attorneys in Vancouver or Battle Ground, WA. Call us at 360-695-3309 or use our contact form to schedule an appointment. We represent accident claims on a contingency fee basis.