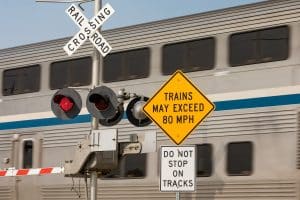 Cars and trains don’t collide often – but when they do collide, the consequences are often deadly or catastrophic. There are many precautions that both railroad companies and the drivers of cars and other vehicles should take to avoid these dangerous collisions. When a railroad company or a driver is negligent, they deserve to be held accountable for all your economic and personal damages.

A few reasons that cars and trains may collide include:

Truck drivers and bus drivers need to take extra precautions because their vehicles are longer, wider, and heavier than most passenger cars. This means it can take longer to cross the tracks.

What steps can railroad companies and drivers take to avoid accidents?

Amtrak, local commuter trains (like the West Coast Express or SkyTrain in Vancouver) and even the freight trains that run through Vancouver and Battle Ground can take many steps to avoid accidents at railroad crossings. The manufacturers of the products railroad companies use also need to ensure that their railroad safety devices work and that they’re not defective.

Both railroad cars and vehicles have numerous moving parts. The failure of any one part and a critical time can be catastrophic. There are federal and state laws that govern the operation of trains in Washington State. The Federal Railroad Administration (FRA) has the authority and responsibility to enable the safe, reliable, and efficient movement of people and goods across America. The FRA staff includes “nearly 400 Federal safety inspectors who specialize in one of six technical disciplines focusing on compliance and enforcement in:

According to the Bureau of Transportation Statistics, there were 1,657 train accidents in 2021. More than 1,000 of these accidents involved train derailments. Eight people died and more than 100 were injured.

Forbes states that those numbers may increase without safety improvements and with the development of self-driving vehicles. According to Forbes, only about 1/3 of railroad crossings have a gate (more than 80,000 crossings nationwide). Just because a railroad doesn’t have a gate, doesn’t mean the railroad crossing isn’t dangerous. When there is no gate, the initial burden is on the driver to proceed with extra caution. If there is an accident, the railroad company could be liable for failing to install a gate.

The development of self-driving vehicles is advancing. Level 4 and level 5 vehicles don’t have a driver. Level 2 and 3 vehicles have a driver who shares the driving controls with their vehicle’s computer systems. Many drivers over-rely on the vehicle’s Advanced Driver-Assistance Systems (ADAS).

Artificial intelligence systems can be programmed to respond to known dangers at railroad crossings – by taking specific programmed steps. In theory, the AI program could be better than a human driver who is drunk, distracted, or reckless. AI programs do have many hurdles though. There is a lot of technology that could help – with a lot of testing, a lot of time, and huge investments:

Even with all these technological advancements, there are many scenarios where the AI may not work.

Who is liable for a railroad accident between a train and a vehicle?

At Philbrook Law Office, we file personal injury claims and wrongful death claims against every responsible party. The defendants may include:

At Philbrook Law Office, our train accident lawyers in Vancouver and Battle Ground, WA understand the unique difficulties involved in filing claims against railway companies. If you were injured or a loved one tragically died when a train struck a car, truck, or another type of vehicle, call us at 360-695-3309 or complete our contact form to schedule a free consultation. We’ll guide you through each phase of the claims process.