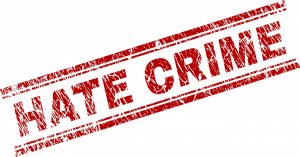 Many federal and state crimes are motivated by hate and prejudice. Hate crimes include offenses that are based on bias toward victims because of their race, national origin, gender, sexual preference, disability, religion, and other identity factors. These offenses usually are distinct crimes separate and apart from other offenses. Hate crimes also include standard criminal offenses which are graded more seriously if they are motivated by hate.

On November 20, 2020, Security Magazine reported that the Federal Bureau of Investigation (FBI) “released Hate Crime Statistics, 2019, the Uniform Crime Reporting (UCR) Program’s latest compilation about bias-motivated incidents throughout the nation.” The report is based on data from more than 15,500 law enforcement agencies. The report provides information about the crimes, the victims of the crimes, the offenders, and where the crimes occurred. The UCR data was based on 8,559 criminal incidents which resulted in 7,314 crimes of bias. Some jurisdictions did not submit reports.

The distribution of bias crimes was as follows:

About 2/3 of the bias/hate crimes targeted the person, and 1/3 targeted property.

The breakdown of bias/hate crimes against the person involved:

There were 51 murders, 30 rapes, and three human trafficking offenses.

The hate crimes against property mostly (about 3/4) involved “acts of destruction/damage/vandalism.”

The other property crimes included burglary, robbery, theft (larceny and motor-vehicle), and arson.

There were also 236 offenses classified as “society” offenses. These include gambling, prostitution, and drug crimes.

The breakdown of the known offenders

According to the UCR program, the “term known offender does not imply that the suspect’s identity is known; rather, the term indicates that some aspect of the suspect was identified, thus distinguishing the suspect from an unknown offender.”

Of the 6,406 known offenders their status was as follows:

Some of the other offender groupings included American Indian, Alaska Native, Asian, Pacific Island, and multiple races. Each of these categories was fairly small: “Of the 5,443 known offenders for whom ethnicity was reported, 33.1% were Not Hispanic or Latino, 10% were Hispanic or Latino, and 1.9% were in a group of multiple ethnicities. Ethnicity was unknown for 55.0% of these offenders.”

Where did the hate crimes occur?

For the crimes where the type of location was noted on the crime report:

Crimes of hate or bias normally include more severe sentences than the underlying crime to deter hate as a motivating factor. At Philbrook Law Office, our Vancouver, Washington defense lawyers fight aggressively to assert all your defenses including Constitutional defenses and legal defenses. We work to show hate or bias was not a motivating factor. In many cases, we can negotiate fair plea bargains which reduce the charges to less serious offenses – such as removing the hate crime component. To make an appointment with a seasoned criminal defense lawyer, please call our offices in Vancouver or Battle Ground, WA. You can reach us at 360-205-9615 or fill out our contact form.