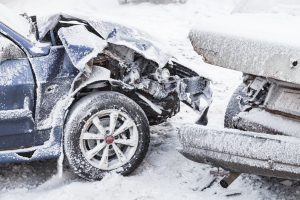 Washington gets a lot of snow and rain each year. The snow lasts from November through March. The elevations make the state a beautiful attraction. There are hazards, though, when driving in inclement weather. Pouring rain and heavy snow reduce visibility. The moisture on the road can make getting traction at higher speeds almost impossible. Snow and ice can cause your vehicle to slide into other vehicles or into embankments.

Data from the Federal Highway Administration, show that rain and snow are major causes of accidents. The 10-year averages (during 2007-2016) are as follows:

The FHA states that precipitation creates dangers because it impacts visibility and pavement friction and causes obstructions in lanes. It also affects traffic flow, especially speed and roadway capacity, which can lead to delays. Finally, it affects the driver’s ability to operate the vehicle by:

Types of negligence driving in rain and snow

Drivers are responsible for the accidents they cause if they fail to drive safely in rain or snow. Negligence includes:

Drivers need to be on the lookout and feel for “black ice,” which can make traction impossible.

At Philbrook Law Office, our Vancouver, WA car accident lawyers have obtained strong settlements and verdicts in more than 2,000 cases. We work with investigators and the police to help determine how the accident happened. We demand compensation for all your medical bills, lost income, property damage, and your physical pain and emotional suffering. When tragedy occurs, we file wrongful death claims on behalf of deceased car accident victims. To speak with one of our lawyers in our Vancouver or Battle Ground, WA offices, please call us at 360-205-9615 or fill out our contact form. We represent personal injury clients on a contingency fee basis.